Since coming to Japan, I’d noticed that my eyes felt a lot more tired than usual. I wasn’t sure whether this was due to my slightly unideal sleep schedule, the fluorescent lights at work, or using computers too long now that I have an office job for the first time. But after half a year here, I’d decided it was time to try to do something about it.

To begin with, I tried just using gaming glasses (yellow glasses that look a bit like thin ski goggles, made for reducing the glare from computer screens) and it helped a little, but I was still getting headaches and eye fatigue after too long. I already had prescription normal glasses I’d brought with me to Japan, but when I’d got my eyes tested back home they’d told me my vision was inbetween prescriptions, so I could either get the lower one, which wouldn’t make everything perfectly clear, but would help, or the higher one, which felt almost a bit too clear, but at least it was completely clear. I chose the higher prescription, but for a while I’d felt like it was too strong, leading my eyes to be unable to cope with what was like switching between maybe 480/720p and like 2140p, and putting me off using my glasses.

So I decided to try going to a Japanese opticians. There happened to be one called Yano Megane in a shopping centre near me, so I went in there one evening and said I wanted to have my eyes tested. I had thought I’d have to book an appointment, but they showed me in right away and did the eye test right then and there.

I don’t know what eye tests are like in other non-English speaking countries (I’m guessing most if not all English-speaking countries use the lines of letters), but in Japan they use lines of circles, and you have to tell which side of each circle has an opening in it (up, right, bottom, left). 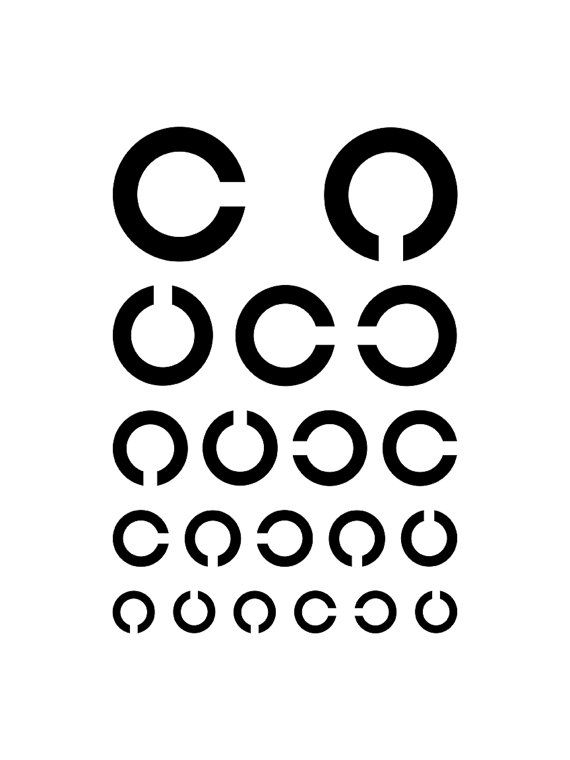 There were also the usual red/green light tests, and another one which had a load of lines crossing over each other and you had to say whether any lines appeared more in focus than others.

Although he didn’t speak any English, the optician made sure to explain everything and was very neutral, I didn’t feel like he was trying to pressure me to get new glasses or anything, he would help me weigh up the options with honesty and decide what would be best for me, which was a relief in a country where if you go in a clothes shop or something you get followed around as soon as you step in the shop or look at a particular item most times.

In the end, I chose to get new lenses, and upon doing so, he showed me the different types of lenses I could get, the different coatings and shapes, and let me see the differences between different ones, even explaining to me that my current lenses were shaped in a way that made the vision distort around the edges, which probably wasn’t helping my eyes (and it wasn’t like he was trying to upsell with this, because the not-so-distorted/more natural lenses didn’t cost any more or less money than the ones shaped like the ones I had, I honestly felt that he was just trying to help me find the glasses that were best for me).

I went for the less distorted lenses with anti-glare coating (the anti-glare coating did cost extra, but it was worth it), and what was great was that they said they could even put the new lenses into my current frames, saving me from having to buy a whole new pair of glasses. I had to leave my glasses with them, but after 2 or 3 days they were ready and I could just go and pick them up!

I’ve noticed that since getting my new lenses, my eyes don’t hurt anywhere near as often as before. I generally use my glasses whenever I use the laptop at work now, especially when translating, and I feel so much better. If you’re unsure of your prescription, or just feel like your eyesight’s got worse since coming to Japan (I’ve heard a lot of people experience this, maybe from having to try to read complicated Kanji all the time), I’d definitely recommend trying a Japanese opticians. I feel like most will only be able to communicate in Japanese, but if you have a reasonable level of Japanese fluency you should be fine!

[Disclaimer: I wasn’t paid to advertise Yano Megane in this post, these are my own recommendations from having used their service myself, and I don’t benefit in any way from making this post about their service]

A British CIR (Co-Ordinator for International Relations) working in Beppu, Oita Prefecture after completing an undergrad in Japanese Studies (with French) and a postgrad in Translation Studies. Speaks English, Japanese and a little French. A slightly lanky, slightly gothy-looking girl who loves cats, kpop and Pokemon~